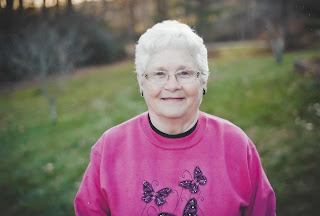 Mary Conner Poff of Copper Hill, left her earthly home on December 2, 2016, making her stay on earth 85 years.  She was preceded in death by her husband of 55 years, Wade M. Poff. She was born the oldest daughter of the late Tiras and Irene Conner.
Mary is survived by her five daughters and sons-in-law, Judy P. Ravan (C.J.), Cathy Holden (Elwood) Vickie Childress (Stewart), Cindy Sutphin (Wayne), Candy Creasy (the late Charles “Bubba” Creasy); 11 grandchildren; three step-grandchildren; four great-grandchildren; seven step great-grandchildren; one great-great step grandchild; sisters and brothers-in-law, Mae Vest (Alvin), June Conner (Dean); sister-in-law, Silvia Whitlow; several nieces and nephews.
Mary has been a member of the Salem Primitive Baptist Church for 51 years.  She served as clerk for Copper Hill Post Office and retired from the post office with 26 years of service.  She was a member of the VFW Ladies auxiliary 7854.
Funeral services will be held at 11:00 a.m., Tuesday, December 6, 2016 at Salem Primitive Baptist Church (Head of the River), with Elder Carl Terry and Elder Alan Terry officiating with interment to follow at the Restvale Cemetery.  Family will receive friends from 2:00 p.m. to 4:00 p.m. and 6:00 p.m. to 8:00 p.m., Monday, December 5, 2016 at Maberry Funeral Home.
In lieu of flowers, memorial contributions may be made to the Salem Church or Floyd County Rescue Squad.