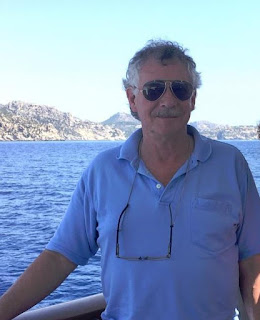 Kenneth “Ken” Eugene Bonanno died Monday, August 1, 2016, in Fredericksburg, Virginia. The son of the late E. Ruth Hatcher of Floyd, and Antonio C Bonanno, Ken was a graduate of Virginia Commonwealth University. He went on to obtain a gemological diploma from the Gemmological Association of Great Britain, and was a Fellow of the Gemmological Association (FGA). He had been a partner with his mother at Bonanno’s Antiques in Fredericksburg for almost 40 years.
From the time he was a young child, he spent many summers in Floyd with his grandparents, aunts, uncles and cousins. He considered Floyd and Meadows of Dan his summer home-away-from-home, where he is remembered by all as the kid who knew no fear when it came to animals, snakes and assorted other creatures of nature! Most vivid in the memories of most of his aunts and uncles was the afternoon he disappeared at about age 3 while visiting at the home of one of his uncles, only to be found kneeling alongside his newest friend, a nice “big bull” out in one of their fields! When Ken was finally found, both he and the bull seemed content with one another, but none of the family was “content” until Ken had been “gingerly removed” him from the bull’s side. Ken was never able to understand why everyone was making such a commotion upon finding him!
Ken went on to become a highly respected gemologist with an extensive knowledge of rare gems and jewelry. In addition to “gemology” he was also interested in other areas of science, including astro-physics. He was also a passionate collector of fine watches and classic cars that he enjoyed restoring. He loved skeet shooting and was a former president of the Fredericksburg Rod & Gun Club as well. Those who knew him well knew he also loved jazz and was an excellent saxophone player.
Ken was a loving brother with a keen mind, kind heart, gentle nature, and intense curiosity about the world around him. He loved animals of every kind. He was devoted to our mother and cared for her lovingly for the many years she was confined to a nursing home.
Survivors include his siblings, Anthony J Bonanno of Santa Fe, NM; Antoinette Bonanno Matlins of Woodstock, VT; Beth Rosine Bonanno Honeycutt of Floyd, VA; Karen Bonanno DeHaas of Land O’Lakes, FL; Kathryn Bonanno Patrizzi of New York City and Flumet, France; and a niece and 4 nephews who adored him.
A brief memorial and burial service will take place at Topeco Church of the Brethren, on October 8th at 11:00 am.