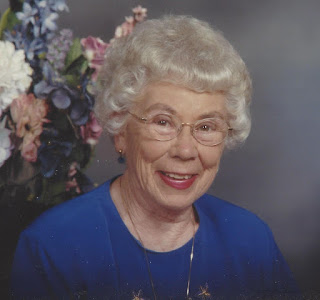 Mrs. Treva Hollandsworth Cannaday, 92, 0f Willis, Virginia passed away on Monday, April 3, 2017 at TLC Adult Home In Henry, VA.  Born on October 18, 1924, she was the daughter of the late Early and Gerusha Phillips Hollandsworth.  She was preceded in death by her  husband, Warren G. Cannaday; her son, Lloyd R. Cannaday; three sisters, Gaye Buckner Wade, Geneva Bryson and Sharlene West; three brothers, Monroe, Melvin and Everett Hollandsworth.
Treva was a member of Pleasant Hill Church of the Brethren and the Topeco Church of the Brethren in Willis, VA.  Treva loved the Lord and her family, especially her four grandsons who spent many memorable summers together on the Cannaday farm.  She loved gardening, canning and tending her many beautiful flowers which gave her much joy over the years.

She is survived by her two sons, Calvin G. Cannaday and wife Diane of Pilot, VA; David H. Cannaday and wife, Carol of Clemmons, NC; and daughter-in-law, Cindy Cannaday of Collinsville,VA; four grandsons, Justin Cannaday and wife Heather, of Clayton, NC; Derek Cannaday, of Radford, VA; Daniel Cannaday and wife, Elisia, of Mechanicsburg, PA; and Hunter Cannaday and wife, Alyse, of Horse Shoe , NC; six great-grandchildren, Owen, Asa, Josilyn, Mae, Sylvie and Isla, as well as several step-grandchildren and great-grandchildren.
Funeral service will be held at 3:00 p.m., Friday, April 7, 2017 at Maberry Funeral Home with Pastor Mike Varner officiating with interment in the Pleasant Hill Cemetery.  Family will receive friends from 1:00 p.m. to 3:00 p.m. prior to the service.
The family would like to thank Annette Naff and her staff at TLC Adult Home for the tender, loving care they gave Treva over the last couple of years.  Thanks  is also extended to the nurses at Mountain Valley Hospice in Martinsville, VA.