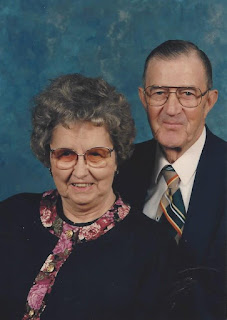 Sparrel Tyler Turner, 95, of Floyd, passed away into his eternal rest March 7, 2016. He was born in Floyd County January 4, 1921 to the late Stant W. Turner and EllaTrail Turner. He was also preceded in death by his wife, Claris Radford Turner and several brothers and sisters.He is survived by his son and daughter- in- law Tyler and Frankie Turner, and daughter and son-in-law Doris and Hebron Quesenberry all of Floyd, sister Venice Barton and sister-in-law Arlene Turner. Also surviving are four grandchildren, Melissa Thompson (Scott), Tammy Williams (Jeff), Renee Turner and Tina Osborne (Terry), nine great-grandchildren, Bridget Lucas (Justin), Brandon Thompson, Vincent and Michael Osborne, Spencer Turner (Brittany), Fayth Nichols, Megan, Nicholas and AJ. Williams. Also surviving are two great-great grandchildren, Amelia and Cooper Lucas, one step-Granddaughter Kristi Shaw (Mark). Several nieces and nephews also survive.
He retired from Radford Arsenal on February 1, 1983 after 34 years of service.He is a member of Red Oak Grove Church of the Brethren.The family would like to thank a very special, caring caregiver, Kathy Lingelbach  who has been caring for him 8 years.
Funeral service will be held at 2:00 p.m.Wednesday, March 9, 2016 at Maberry Funeral Home with Bro. Hebron Quesenberrry and Bro. Richard Thomas officiating.  Interment will follow in the Jacksonville Cemetery.  Family will receive friends from 6:00 p.m. to 8:00 p.m., Tuesday, March 8, 2016.  Family will also receive friends 1 hour prior to the service.