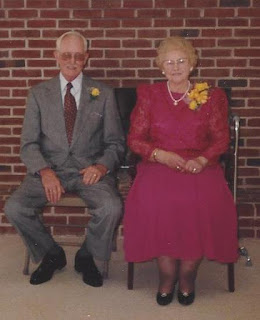 Elmer “Spud” Lane Webb of Roanoke, formerly of Floyd, Virginia passed away Friday, January 1, 2016 at the age of 97.
Spud was a WWII combat veteran, and recipient of the Purple Heart. He retired from Halmode Apparel, after which he and his wife Treatise, returned to farm land originally purchased by his parents George C. Webb, Sr. and Elitha Brimm Webb in 1922.

He is preceded in death by his wife Treatise Webb, brothers Harry Webb, Early Webb, George C. Webb, Jr., and twin brother Delmer “Buster” Webb, as well as sisters, Odell Graham and Bertha Schoolcraft. He is survived by sisters, Claudine Browning (Joe) and Nettie W. Brown; sisters-in-law, Mavin Steele (Jack) and Coreen Martin;  brother-in-law, Arlie Thompson;  numerous nieces and nephews. Uncle Spud was like a second father to many of them.

Funeral service will be held at 11:00am on Monday, January 4, 2016, at the Salem Primitive Baptist Church (Head of the River)  with Elder Larry Hollandsworth officiating. The interment will follow at Restvale Cemetery.
The family will receive friends from 2:00-5:00pm on Sunday, January 3, 2016 at Maberry Funeral Home, Floyd VA.

Flowers are appreciated, and donations will be accepted and can be made payable to the Paynes Creek Primitive Baptist Church, C/O Karen Link, 610 Kellys Drive SE, Floyd, VA, 24091
Posted by Maberry at 8:33 PM