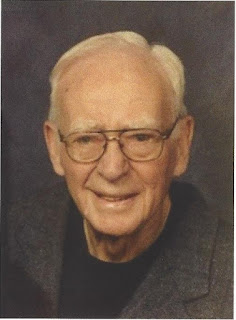 Cecil H. Phillips, age 94 of Fairborn, went home to be with the Lord on Friday August 28, 2015 at the Dayton VA Hospice.  He was born November 19, 1920 in Pulaski, Virginia, the son of the late Eli and Manilla (Simpkins) Phillips.  Cecil served his country in the U.S. Army Air Corps during World War II; and was employed for many years as an auto body repairman, retiring from Jack Huelsman Chevrolet in Fairborn.  He was a longtime member of Victory Temple, was an avid gardener, and always enjoyed working on cars.  In addition to his parents he was preceded in death by his wife, Arlie in 2007; two brothers; and four sisters.  He is survived by four children, Juanita (James Coby) Preston of Fairborn, Bill (Brenda) Phillips of Fairborn, Gary (Darlene) Phillips of Fairborn, Mary (Ed) Rice of Kettering; numerous grandchildren, great-grandchildren, and great great-grandchildren; two sisters; a brother; and many nieces, nephews, and other extended family.  Funeral Service will be held 11:00 a.m. Wednesday, September 2, 2015 at Indian Valley Church of God  with Pastor Kenneth Poston  officiating  with Military Rites by Floyd V.F.W. Post #7854 and American Legion Post #127.  Interment to follow in the  Captain George Quesenberry Cemetery. Family will receive friends 6 to 8 p.m., Tuesday, September 1, 2015 at Indian Valley Church of God.  Memorial contributions, if desired, may be made to the Dayton VA Hospice Fund.
Posted by Maberry at 6:29 PM