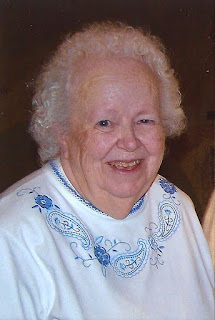 Bessie Bungard Spangler,82, of Catonsville, Maryland, passed away June 7, 2015. She was the loving wife of Jack Spangler, son of the late Mr. & Mrs. C.B. Spangler, for over 57 years.   She was born December 8, 1932 in Butler, Indiana, the daughter of the late Oliver and Effie Hodge Bungard.  She graduated from Butler High School in 1952 and immediately went to work for the FBI in Washington, DC.  In 1953 she met her future husband at Fort Meade, MD.  They were married in 1957 and together had four children.  She was preceded in death by her sister Laura and her brothers Willis, Samuel, Francis, George, Oliver & James.
She is survived by her husband Jack and four children, Janet and Mark Branch of South Park, PA, Gary and Juli Beckelheimer Spangler of Columbus, OH, Karen and Bob Black of Richmond, VA and David and Lydean Ratcliffe Spangler of Hollywood, MD; sisters-in-law, Barbara Spangler of Floyd, VA  and Marie Spangler of Ft. Washington, MD.  Also surviving are nine grandchildren and two great-grandchildren along with numerous nieces and nephews.
Funeral service will be held 11:00 a.m., Thursday, June 11, 2015 at the Presbyterian Church of Floyd with Pastor Tupper Garden and Pastor Richard Thomas officiating with Interment in the Jacksonville Cemetery.  Family will receive friends from 6:00 p.m. to 8:00 p.m., Wednesday, June 10, 2015 at Maberry Funeral Home.