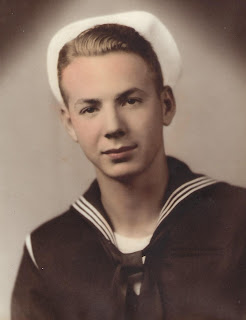 Maurice Trent Slusher, 92, of Floyd went to his heavenly home on Wednesday, Sept. 4, 2019.  He was born on April 14, 1927 in Floyd County, to George Lester and Callie Lillie Weeks Slusher.  He was also preceded in death by his sister Betty Jean Mannon and his son-in-law Seth Wilson.

He was devoted to his wife of sixty-nine years, Nadine Hale Slusher. Also surviving are his son Richard (Liang) Slusher and daughter Denise Wilson, granddaughters Sarah Wilson (Travis Johnston) and Katie Wilson, and great-granddaughters Quinn and Maisie.  He also leaves behind his brother Lane Slusher (Mina) and sister Jane S. Williams as well as a number of nieces, nephews, and cousins.

Shortly after his graduation from Floyd High School in 1944, Maurice and three friends enlisted in the Navy.  He was assigned to a yard mine sweeper and served sixteen months (Feb 19, 1945 to July 30, 1946).

When he came home, he worked for the U.S. Postal Service, beginning in 1947 as a clerk in the Floyd Post Office.  From 1962 to 1988, he worked as a rural mail carrier, serving 500 households on a ninety-three mile route.  He was also elected as State Steward for the Rural Letter Carriers of Virginia (1975-1988).  As an avid stamp collector he built a collection of post mark covers from community post offices in Floyd County dating back to the early 1800s.  He donated his collection of postal memorabilia to the Floyd County Historical Society where a postal display is presented.

Maurice loved baseball and was one of the original members of the Floyd Blue Sox who played in the Tri-County League beginning in 1947.  He umpired high school games, coached Little League teams, and followed the game of baseball all his life.  He enjoyed music, especially bluegrass, and was a familiar face at festivals, fiddlers conventions, and concerts at the Country Store.  Maurice helped bring County Sales to Floyd and worked to make the company a success.

Maurice devoted his life to his community, family, and farm.  He and Nadine had been active members of Falling Branch United Methodist Church since 1958, serving the church in all capacities.  He was a charter member of the Floyd County Historical Society and freely shared his love and knowledge of county history.  He restored, maintained, and documented the Jacob Slusher and Weeks Cemeteries.  Having grown up tending the farm that had belonged to his great-great-great grandfather, Maurice also continued farming and gardening on his own, raising beef cattle and improving his land.

Funeral services will be held at 1:00 p.m. on Saturday, September 7, 2019 at the Maberry Funeral Home Chapel with Rev. Bill Schoeneman officiating. Interment will follow in the Jacksonville Cemetery with Military Rites by the Floyd VFW Post # 7854 and American Legion Post #127. The family will receive friends from 11:00 a.m. – 1:00 p.m. prior to the service at the funeral home.