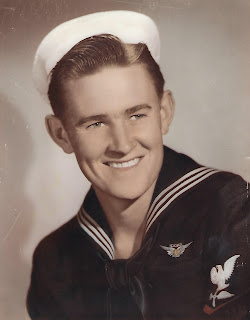 David Lee Harris, 86, of Roanoke, VA, departed this life peacefully September 6, 2019.  Born November 19, 1932 in Willis, VA, he was no stranger to country living and farm work.  David was a veteran of the United States Navy, serving during the Korean Conflict from 1950-1953.

After serving our country he married his sweetheart, Opal Hollandsworth in 1956.  David graduated from Virginia Tech in 1960 and began a career in engineering that spanned another 32 years until his retirement in 1992.  He worked for Hayes Seay Mattern and Mattern as well as the United States Department of Agriculture’s Forest Service.  A follower of Christ since he was 11 years old, David was an elder in the Presbyterian Church and a skilled Sunday school teacher.

He was a devoted husband, father and grandpa and supported many charities through generous giving.  He loved Virginia Tech Football and Basketball and always welcomed a discussion on politics or religion.  He also loved a good round of golf with his family and friends and especially the annual golf trips with the Southern Gentlemen’s Golf Association.

David is preceded in death by his wife of 46 years, Opal Hollandsworth Harris, his mother and father, Lettie Marie and Thurman A. Harris, his sisters Betty Ratliff and Mary Lou Harris, and infant granddaughter Cheyanne Elizabeth Angle.

Funeral services will be held at 1:00 p.m. on Monday, September 9, 2019 at the Maberry Funeral Home Chapel with Rev. Clyde Bishop and Rev. Joe Cox officiating. Interment will follow in the Slaughter Family Cemetery with Military Rites by the Floyd V.F.W. Post #7854 and American Legion Post #127. The family will receive friends from 11:00 a.m. – 1:00 p.m. prior to the service at the funeral home.

In lieu of flowers, donations may be made in David’s memory to a charity of your choice.
Posted by Maberry at 9:23 AM