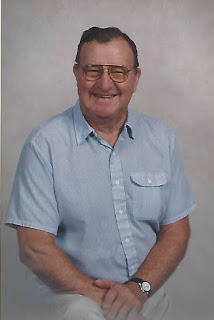 James Ewell Harmon, 91 of Floyd, passed away on Wednesday, February 20, 2019 in his home surrounded by family.

Jim was born in Willis, VA to Edgar & Mary Harmon on June 9, 1927. He married Hilda Simpson on July 2, 1949. They raised four children above Harmon’s Store in Willis which Jim owned and operated from 1953 to 1978. He served on the Floyd County School Board for a number of years. After selling the store, Jim and his son, Jamie, distributed Esso and then Exxon oil and gas under the name of Harmon Oil Company. He eventually sold the business to B. Clark.

Funeral service will be held at 1:00 p.m. on Saturday, February 23, 2019 at the Maberry Funeral Home Chapel with Pastor Steve Johnson officiating. Interment will follow in the Restvale Cemetery. The family will receive friends from 11:00 a.m. – 1:00 p.m. prior to the service.
Posted by Maberry at 12:36 PM