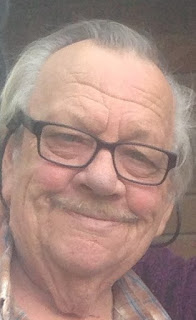 Jerry Wayne Burnette, of Roanoke, went to be with his Lord and Savior on Wednesday, October 11, 2017. He is preceded in death by  his companion Margaret Sumner; his father Jeremiah Jethro Burnette; his mother, Velma Recie Moran; and his sister, Linda Harrington.


Jerry was born in 1947 in Radford, Virginia. He spent his childhood in Floyd, Virginia, but resided in Roanoke, Virginia most of his life. He was a painter for over 30 years. He enjoyed his work, family, friends, gardening, the lottery, Jeopardy, sudoku puzzles, and attending his family reunions. Jerry liked to dance and knew how to have a good time. He loved western, country music, and his beloved pets Molly and Nikki.
Jerry was survived by his daughters and sons in law, Lisa and Mark Mundy, and Constance and Scott Stinson; his grandchildren and step grandchildren, Kristin and Ryan Janney, Zachary Mundy, Katlin Hogge, Jacob Mundy, Steven Knisley, Samantha Stinson, Adriana Knisley and Paige Stinson; his great-grandchildren, Abigail, Brayden, Raina, and Aria; his sisters and brothers in law, Loretta and Irvine Hylton and Debra and Jamie Harmon; a large extended family and many friends.
Funeral services will be held on Wednesday, October 18, 2017 at Maberry Funeral Home, 367 South Locust St., Floyd, Virginia 24091. Visitation is at 12 pm. The Memorial Service is immediately after at 1pm. Procession to graveside will follow the service.